"A local legend says that the Karst was a green and fertile land, full of meadows, forests and streams with fresh water. One day the good Lord saw that in a corner of the earth there was a big pile of rocks which damaged the agriculture and commissioned the Archangel Gabriel to pick them up and throw them into the sea. Gabriel then filled a heavy bag and headed to the Adriatic. When he found himself near the Karst the devil saw him, got intrigued by the load and pierced the sack with his horns. What a disaster! All those stones poured on the ground and reduced the plateau to a huge heap of stones."

The term Carso or Karst in English and German (Kras in Slovenian) comes from the word Carsa (Karra or Garra ) of preindoeuropean origin, which means rock, stone. In fact, the great protagonist of the Karst landscape is just the stone, as the legend about the creation of the Carso tells. From the geographical point of view the word Karst indicates the Karst plateau, once called Carsia Giulia, which extends to the east and south - east of the city of Trieste. 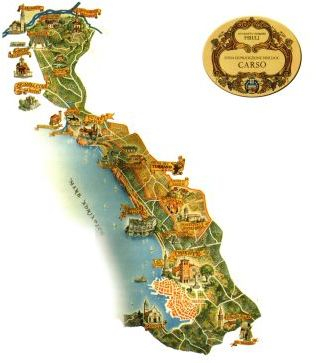 Currently, for political reasons, it is divided into the Karst of Trieste and the one of Slovenia. The Trieste Karst is restricted to the Italian territory only and extends for about 40 km from Mount St. Michele (Monfalcone) to Val Rosandra to an average width of 5 km. While the territory of the wine DOC extends to Muggia, that is all the province of Trieste and part of the province of Gorizia.

The special position of the Karst plateau fosters a varied climate: some areas have more mediterranean features some others even alpine ones, nonetheless you can still consider the Karst region as continental climate, characterized by cold winters and hot summers. The average temperature is 10 ° with a difference of about 3 ° from the center of Trieste. In this area the Bora blows, the strong wind from the north-east, whose gusts can reach 170 km/h.

The Carso DOC covers the following six grape varieties traditionally grown in this area: among the white wines there are Vitovska, Malvasia (from istrian Malvasia-Malvasia istriana), Glera (the mother grape of Prosecco), Pinot Grigio, Sauvignon, Traminer, Chardonnay; among the red wines there are Terrano, Refosco with the red stalks, Cabernet Sauvignon, Cabernet Franc and Merlot.