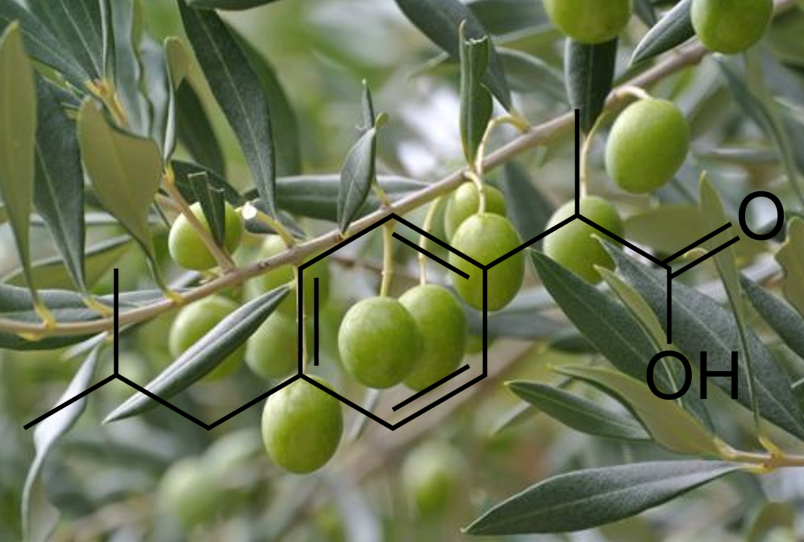 The spicy taste of EVO oil is due to the presence of oleocanthal, a substance contained mainly in olives and extra virgin olive oil and is reducing over time. The duration of EVO oil with average organoleptic characteristics is 18 months.
The oleocanthal is the molecule responsible for the “spiciness in the throat,” or rather the spicy sensation that we feel when we ingest high-quality EVO oil. The importance and peculiarity of this substance is in possession of antioxidant and anti-inflammatory features. Its anti-inflammatory action on the body is very similar to ibuprofen, one of the most widely used non-steroidal anti-inflammatory drugs. Non-steroidal anti-inflammatory drugs (NSAIDs) such as acetylsalicylic acid, paracetamol and ibuprofen, differ from steroids in that they have significantly fewer undesirable effects and in that their analgesic effect does not belong to the class of narcotics.
The discovery of the oleocanthal is attributed to Dr. Gary Beauchamp, scientist and biologist who works at the Monell Chemical Sense Center in Philadelphia, in an organoleptic laboratory, which is mainly dedicated to the testing of substances and the quantification of their sensory characteristics. Gary, during a molecular nutrition congress in Sicily, was invited to taste extra virgin olive oils in an oil mill. Trying extra virgin olive oil, he found the tingle left by the oil on his throat familiar. Gary was working on the taste of various liquid ibuprofen solutions and the itch of the olive oil reminded him of ibuprofen.

A healthy lifestyle can prevent the onset of multiple diseases. Hippocrates (about 460 BC) argued that medicine must not cure, but avoid avoidable evils. A somewhat current concept developed by preventive medicine. “make food your medicine and medicine be your food”.

To do this, it is essential to be informed and aware. It is a work of research, analysis and responsibility, a work that must be carried out by a multidisciplinary team where everyone brings their experience and shares it with a view to deepening and growth, so that the information is clear and accessible to all.

A link between the past, present and future 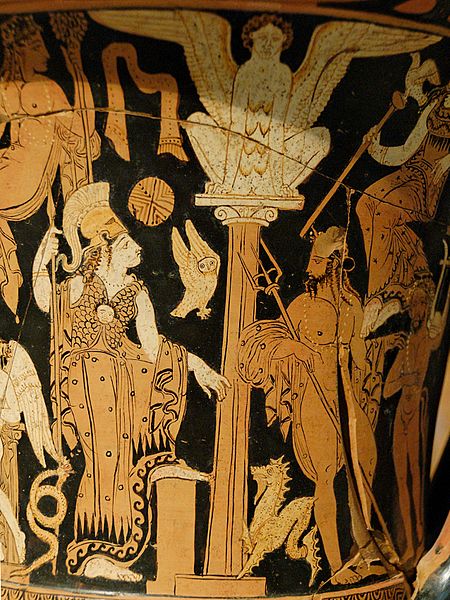 An ancient legend tells that Athena and Poseidon one day challenged each other to offer the most beautiful gift to the people of Attica. Zeus would have been the judge of the competition between the two powerful gods. Poseidon, hitting the ground with his trident, made a pool of sea water appear, which symbolized Attica's dominion over the sea, and a horse, the most powerful and fastest, capable of winning all battles. Athena, on the other hand, hit the rock with her spear and gave birth to a beautiful tree from the earth, the first olive tree, a promise of useful production and a symbol of peace. The splendid plant lit up the night, healed wounds and treated diseases and also offered precious nourishment, giving well-being and therefore peace to all the people who would cultivate it.

Zeus chose this, blessed the silver leaves and said: «This plant will protect a new city which will be called Athens by you, my daughter. You gave men the olive tree and with it you gave light, food and an eternal symbol of peace ". Athena from that day became the patron goddess of the city of Athens.

This legend highlights the importance of the olive tree in the ancient times, so we also begin a journey as a multidisciplinary group to discover the properties and qualities of this splendid plant. Our goal is to correlate extra virgin olive oil with the health aspect, Feuerbach claimed that "we are what we eat", starting from this statement we will analyze the effects that extra virgin olive oil has on digestion, on immunity and liver function.

The Company Project concerned the realization of a series of investments aimed at improving the business from the environmental, qualitative and profitable viewpoint.
Specifically, the company has purchased the following equipment: tractor, atomizer.

After the vinification process the pomace produced will be conferred to the
Camel Distillerie spa company that will take care of the distillation phases and sale of the
finished product.
INVESTMENT AMOUNT: € 69,000.00
FINANCED AMOUNT: € 34,500.00 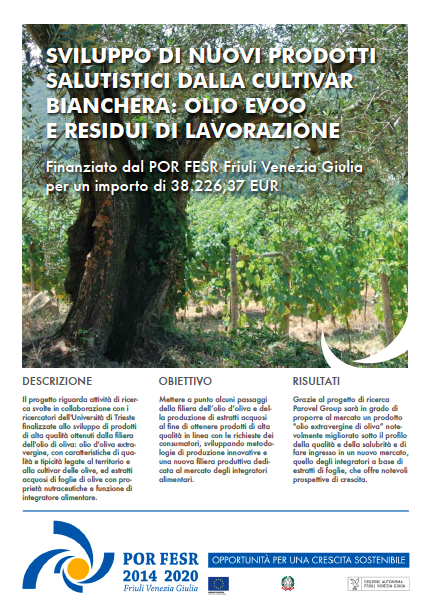 The project concerns research activities carried out in collaboration with researchers of the University of Trieste aimed at developing high quality products obtained from the olive oil supply chain: extra virgin olive oil with qualities and typical characteristics linked to the territory and to the cultivar of olives and aqueous extracts of olive leaves with nutraceutical properties and as a food supplement.

Thanks to the research project, with the eligible expenditure of € 71.670, Parovel Group will be able to offer the market an "extra virgin olive oil" product that has improved considerably in terms of quality and health and to enter a new market field, that of supplements based on leaf extracts, which offers significant growth prospects.