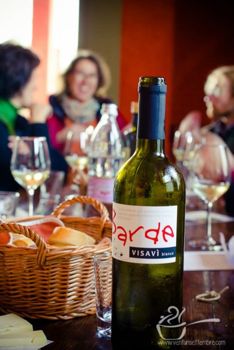 The osmica or osmiza is a meeting rustic place typical of the province of Trieste. It is a place, often private houses or cellars, where wines and foods such as eggs, ham, salami, bacon, cheese, pickles, sometimes sweet of own production are sold and consumed. It seems that this institution dates back to the time of Charlemagne when he allowed the peasants of the territories of Tergeste and Istria, then part of the Frankish Kingdom, to sell their wine directly, announcing it with a hanging branch. The ancient custom took root further with the decree of Joseph II of Augsburg in 1784 that allowed the sale of wine of own production in bulk over a period of eight days. In fact, the Slovenian term osmica (pronounced osmiza) comes from "osem" which means "eight " and indicated the duration of the concession of the opening period, eight days in fact. The activity should be indicated along the road or on the front door by a branch, on pain of confiscation of the goods.

Today the tradition has spread further and the branches along the roads can be found from Karst, both Italian and Slovenian, going through the Val Rosandra villages up to Slovenian Istria. Scattered here and there with arrows they indicate the opening of osmize in this or that village, which are not more of eight days but, according to the wine available, even of a month period. 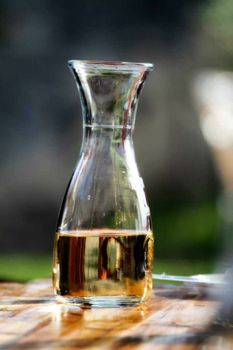 The osmize are family run and in addition to traditional sausages they mainly offer wines from the Karst like Terrano and Refosco as reds, and the white Vitovska and Istrian Malvasia.
The osmica or osmiza, local historical and cultural heritage, finds parallels in Austria where it is called Heuriger (Vienna) or Buscheschank (Carinthia) .

The Parovel Osmiza opens twoe times a year, in the spring between April and May and fall in November. Each opening period is for the Parovel family a contact opportunity with the public, friends and loyal supporters. In short every osmiza is a good opportunity to celebrate together.