How will the olive vintage 2016 be? Throughout the national territory the fly returned to "pay a visit" to the olive groves and at national level there has been a decline in production, somewhere more massive, in other regions as our more limited. "The olive harvest begins this weekend in about 600 hectares of FVG, including 400 in full production and 200 new planting (expectations ranging between 10 and 15 years, well beyond the time of the vine, no more than three years). The Ersa, with precise control in its 35 local stations, informs on its website about the status of the plants weekly" (Source: Il Piccolo).

To introduce the large audience to the extra virgin olive oil made in Trieste  Parovel Oil Mill reopens in Zona Artigianale Dolina. The first varieties to be milled the are sweeter and more present on the national territory: leccino, maurino, leccio del corno and pendolino, then as we approach November the gathering will involve the native variety trees of bianchera. The maturation of the olive always depends on exposure as well as for all the fruits and on the territory of San Dorligo della Valle / Dolina we have the micro-zones characterized by its own microclimate, which contributes to early or late ripening. As always, the weather in the next few weeks will still affect the oily degree and the quality of the crop, but so far we can say that in Trieste the hot summer and the relative low humidity led to a production substantially in health. Even the stage of flowering/fruit developing set in June has enjoyed a fairly stable climate. The production situation will be fairly homogeneous in all Parovel olive groves, with a discreet ration pulp/kernel despite the oil fly that has unfortunately affected also our olive groves, where in order to stem the damage we practice integrated pest management.

"Portrait of Vitovska", a vertical tasting to discover the Parovel Barde Vitovska

For the second consecutive year at Parovel Winery Monday, October 3 a vertical tasting for experts and wine lovers was held: a meeting led by journalist and sommelier Liliana Savioli to study a particular grape variety, exchange ideas and compare different vintages, retracing climatic conditions, plant health situations and processes. Last year Refosco was chosen, this year it was another cornerstone of the Trieste viticulture. "Portrait of Vitovska" has in fact tried to emulate Henry James pen in outlining the fortunes and misfortunes of our "Lady”of the Karst through 8 years when climate was quite different, given the instability of the summers in the last decade. Today, thanks to the aging in the bottle, Parovel built a small store that is a treasure of comparisons to be drawn. 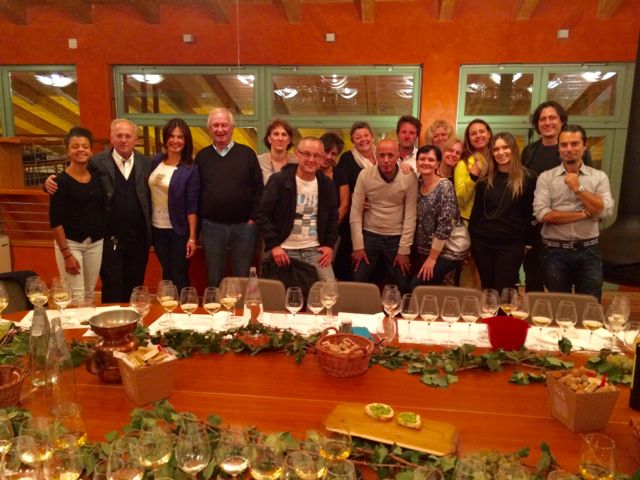 As reported by the winemaker Claudio Fabbro, the cultivation of Vitovska, and other indigenous varieties, is performed by virtuosos who will not get off at all costs with the market terms, operating in a niche that does not have a large production, but offers high quality products, a "heroic viticulture" that would like a wine to live even after 4-5 years after its harvest and acts so that this can be possible. Vitovska has only begun in recent decades to be processed and bottled on its own, once it was used mainly in blends, while today in the Carso DOC it is vinified in white, orange and there are even experiments with dried Vitovska (passito). Parovel Vitovska before bottled as Vinja Barde and now Barde line, is vinified in white without the development of tannins. The journey took us to taste the vintages of Vitovska Onavè Barde 2013 Parovel (award-winning), 2012, 2011, 2010, 2008, 2006 and only for teaching purposes the 2014, 2015 and 2016. All of these wines come from vineyards that now they are thirty years old on average and where irrigation is not practiced. The presence of constant breezes and Bora allow always minimal intervention. The meeting also discussed the link between Vitovska and Bora, since it is precisely the lash of the latter to make Vitovska crispy and to relieve it from pests and molds. The grape of Vitovska is indeed very compact and only the fresh and strong bora manages to "clean it" giving the winemaker very healthy grape that contains in itself a lot of flavor and minerality, which are enhanced with the aging in bottle, even after many years.

For a technical study we quote the tasting notes by Federico Alessio, author of "Heart of Stone. A journey into the soul of the wines of the Carso" that you can also find on his blog:

«Vitovska 2013 Vintage hot and dry. Straw, quite substantial. Nose of good fineness: white flowers, Mediterranean, talc, pear. Vibrant sip, fresh, mineral. Savory finish where hints of citrus and ginger echo.
Vitovska 2012 a bit 'wet vintage, late ripening. Straw with pale golden highlights, good extract. intense aromas of chamomile, acacia flowers and ripe fruit with hints of banana and melon. In the mouth it is soft enough, larger than the previous one. Full-bodied, savory.
Vitovska 2011 busted vintage, says Euro Parovel. Straw to golden. Nose shy and intricate, sulfur and limestone emerge. The palate is balanced, with good clearance between heat and acidity. slightly bitter finish, retrobocca with salt and lemon.
Vitovska 2010 rainy and cold Year. Straw, wispy. delicate olfactory spectrum which combines chamomile, white peach, ginger and lemon. The taste is fresh and vibrant, vertical. Mineral enriched return notes, above all ginger and peach. Pleasant despite the vintage.
Vitovska good 2008 vintage. Yellow with golden flecks, discrete consistency. Chamomile returns, talc, ginger. Then fruit, apricot and melon. Good taste density, intense, savory and fruity. It lacks in length, but it is a nice drink.
Vitovska excellent 2006 vintage. Golden, consistent. Noses evolved, tertiary distinctly, bathed in an aura of incense. acacia honey, propolis, candied citrus, resin balsamic notes and eucalyptus. Warm and enveloping sip, horizontally, but with a residual lively freshness. Full-bodied, intense and persuasive, with good persistence.
Beside were proposed also vintages not yet on the market.
Vitovska good 2015 vintage. Pale straw. uncertain perfumes and intricate, outcrop of white peach and citrus notes. In the mouth the acidity prevails, a still wine in the stabilization phase.
Vitovska 2014 The annus horribilis with a lot of rain. Greenish yellow. Olfactory notes citrine and limestone. Dizzying verticality of the mouth, almost an alcoholic lemonade. Emerges a shy white peach in the aftertaste. Acidity beyond measure.
Vitovska 2016 This is of course the fermenting juice, which for the moment is a great pear juice..!≫

Tourism? At Parovel's it's in the winery and oil mill with final tasting!

We've been receiving groups increasingly numerous visiting our Winery in Bagnoli della Rosandra 624 and the Olive Oil Mill in Zona Artigianale Dolina 546. These are people passionate about wine and EVO oil that combine the visit to the city with a moment of culture of the land with the taste of local productions.
Then they often remain in touch with us: a few days ago a German gentleman who had come on a visit some time ago called us because he had run out of stocks that he had brought with him after his visit! This is how real friendships do not stop at Europe's borders, but go far beyond, even across oceans.
Parovel vineyards and olive groves is now present in a number of tour packages as Val Rosandra gastronomic point of interest. Among the latest initiatives that involves us is the Tasty Bus by Cividin Viaggi that we invite you to discover for new and unexpected discoveries of our territory. 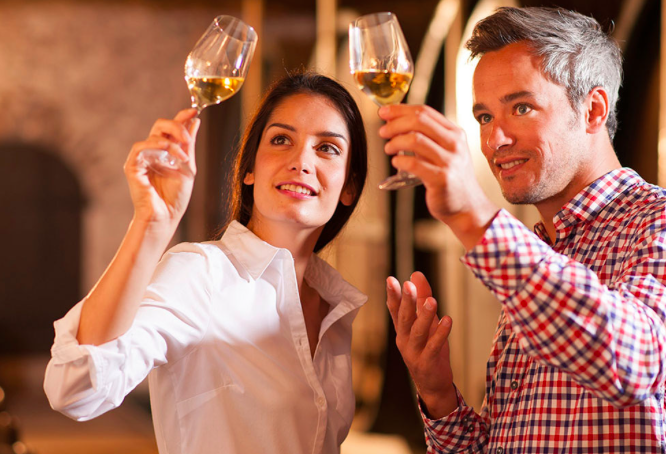 For us it is always very important to know the typical we produce that are typical native of the province of Trieste territory. One of these is the olive bianchera. A mighty and leafy olive tree that is present on our territory since ancient times when the Phoenicians and Greeks brought this typically Mediterranean plant on the shores of the Adriatic from there it spread. Once the olive oil was used for the care of the body but over the centuries it has become an essential element of the Mediterranean diet. Storie Enogastronomiche interviewed our Karmen Stepan Parovel on cultivars that Parovel cultivated for generations in the hills around the Val Rosandra in Trieste and today is bottled in the 100% bianchera Ul'ka line, which for the year 2015 is also a Slow Food Presidium.

"The Green Gold Culture in Trieste has ancient roots, but it has never been easy. It was the Phoenicians that brought the olive trees on the hills surrounding the most northern bay of the Adriatic sea. Later the Romans came to produce olive oil on these ​​limestone lands, nestled between cliffs and sinkholes, near the coast. they learnt to challenge the frequent frosts and bora, katabatic wind that often blows over one hundred kilometers per hour. the activity becomes profitable and already at that time each farm in Trieste and Istria has its own olive press. Through the centuries the Julian olive growing has its moments of prosperity and business development, but also stagnation. The activity blooms in the Venetian era, but it will take years of hard work, perseverance and dedication, to get to today's results. " Thus the article by Carla Ciampalini begins on Food24, Nutrition blog of Il Sole 24 Ore in which a contribution by Elena Parovel appears, interviewed for the occasion: "«Quality and territorial belonging are the two qualitative elements of our olive oil» explains Elena Parovel, president of the Committee for the extra virgin olive oil exploitation and promotion in the province of Trieste. So, conventional techniques over the years have been able to combine the ability to exploit technological innovations that led to strict checks of the entire chain, from cultivation to production, to evo oils storage. An effort that has allowed us to reach in 2004 the protected designation of origin, the product Tergeste Dop guarantees an undisputed environmental, landscape and economic value.